Architects of Tomorrow: The Sunrise Movement Empowers Students to Tackle the Climate Crisis

Architects of Tomorrow: The Sunrise Movement Empowers Students to Tackle the Climate Crisis 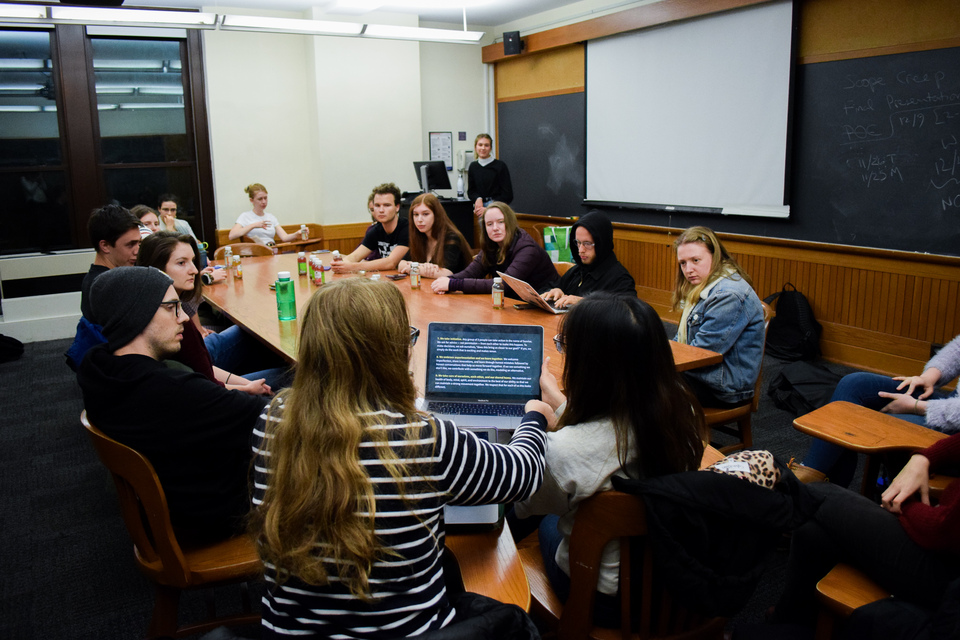 It’s a rainy Thursday evening at the beginning of October, and a group of students is hard at work in Hamilton 516, solving climate change. At the front of the classroom, long sheets of bright yellow paper are spread out on the floor as students sketch out an outline of Manhattan with chalk. Soon, that outline will be filled in with black and blue paint, representing the areas of New York City that will be severely flooded if sea levels continue to rise. But 516 and its inhabitants—the Columbia/Barnard Sunrise Movement hub—are far from grim. As Buffalo Springfield’s “For What It’s Worth” (a protest song from the 1960s, the one that goes: “... stop, children, what’s that sound? Everybody look what’s going down ...”) threads through the speakers, what you get instead is a sense of hope.

Climate change is an enormous problem with a vast range of interconnected sources, consequences, and conflicting interests. But the Sunrise Movement cracks it wide open, fashioning concrete steps that address a larger-than-life issue and empowering members to take action in their own ways. At the beginning of the meeting, one of the hub co-coordinators gives a quick run-down of Sunrise’s national plan, from activism in the coming weeks to a mass nonviolent noncooperation after the next U.S. President is sworn into office in January 2021. It’s concise, but almost dizzying in its implications: In just about 60 seconds, she’s given us Sunrise’s step-by-step guide to saving the world.

The Sunrise Movement is a national organization that was founded in 2017 by a group of recent Swarthmore graduates. Advocating for climate policy, Sunrise has rallied behind the Green New Deal, first breaking onto the national scene when a sit-in at Nancy Pelosi’s office went viral last year. Sunrise’s current focus is pushing climate change to the forefront of the national agenda, particularly as an issue in the 2020 presidential election. Sunrise Movement ‘hubs’—chapters of the organization—started popping up all over the country, and in January 2019, Naomi Hollard, who graduated from Columbia College last year, founded Columbia’s.

Greta Kvittem and Elizabeth Love, current hub co-coordinators and both sophomores at Columbia College, were at the first meeting of the new hub, summoned by announcements and social media. Both remember how hot it was in the crowded basement of GreenBorough. They also recall how their discomfort quickly fell away when Hollard began to speak about Sunrise.

“She was so excited and hopeful, and I had never seen anybody be excited or hopeful when talking about this,” Love says. “I remember told her after, it was like, ‘I feel like I could run a mile right now, like I feel so energized.’”

At Columbia, Sunrise has many actions planned for the year, both big and small. At the meeting, half of the members spent their time painting the flood map. The next day, it would be brought out to the Sundial, where passersby would add Post-it notes to the places in the city that they would miss. The other half, led by Colleen Schmidt, who graduated last year from Columbia College, discussed the hub’s plan to develop a “Green New Deal” for the University—a plan which will require substantial research into what Columbia’s needs are and what would be feasible. Columbia’s hub is also planning to connect and collaborate with other college and university clubs, such as Swarthmore’s hub, to exchange ideas and support.

This is another parallel to the national movement: Sunrise activists participate in a wide range of actions, but the central purpose of the organization is passing the Green New Deal into law. The Green New Deal, sponsored by Representative Alexandria Ocasio-Cortez (NY-14) and Senator Ed Markey (MA), is a sweeping ten-year plan to bring the United States to carbon neutrality by 2050. While the exact legislation is still being drafted, a resolution that outlines its principles was introduced in February 2019. It was the Sunrise Movement’s Pelosi sit-in that drew in Ocasio-Cortez’s support for the effort. However, the plan has drawn criticism for being too vague, too expensive, and too expansive.

“My response to that would be that it's an investment in our future, and if we don't make this upfront investment, we're going to have to make it later,” said Kvittem. “Climate change is going to happen whether we like it or not.”

The Columbia version would most likely share many of the resolution’s principles but would be tailored to the needs of our campus. Sunrise plans to collaborate with other student activists and political organizations such as the Roosevelt Institute and create a policy that will motivate all community members to join in the movement. “We'll have this common goal, [and] we will increase our presence around this goal,” explains Kvittem. “[It will] be something tangible for Columbia students and for us as well, that people can sort of rally around.”

Having those goals, both on the national level and on campus, is incredibly powerful. For student activists, it can be easy to feel as though what you’re able to organize yourself is too small to mean anything to the movement. The NYC flood map might seem like that kind of project. After all, what is actually accomplished? But as a small component of Sunrise’s broader strategy, it gains new meaning.

Kvittem and Love told me that as a newer student organization, one of their main priorities this semester is outreach. (That’s also a central part of the national organization’s mission.) Although they do not engage with climate change deniers—“When we argue with people that deny climate change, it’s putting their opinion on the same level as the fact,” Kvittem told me—they try to plan accessible, symbolic actions, like the flood map and attending marches and protests, in an effort to engage passive supporters. The global climate strike on Sept. 20, which featured events in all 50 states and across the globe, was extremely effective in building momentum. Sunrise held a potluck on campus before the event to make signs and led a contingent of over 250 Columbia students to the strike. Social media is another key part of their efforts; Kvittem mentions that peer-to-peer texting is used before meetings to remind interested students.

Sabrina Shih, a sophomore at Columbia College and a member of the hub, said that she became involved after seeing a GroupMe advertisement for an event. “Our hub was going to go down to Chuck Schumer's office and petition him [to] have him co-sponsor the Green New Deal,” she remembers. “And I was like, ‘Wow.’”

“For me, it was an entryway into this whole new personal release, where because we're doing something, we feel almost more helpful about the situation, so that's what I think drove me first,” she adds.

But getting students to show up at a meeting isn’t the end goal. Both Kvittem and Love emphasized that building a community is essential to their mission. The Sunrise Movement allows for each hub to act autonomously, catering to the needs of their circumstances. “[The national organization] gives us so much freedom to be autonomous, to do what we think that we need to do and to be as active as we need to be. ... We can just go for it,” Love says. “They give us help, but they don't tell us what to do.”

The Sunrise Movement is diffuse, with many moving parts that act independently but are connected by what Love calls the organization’s “DNA.” At the beginning of each meeting, the 11 Sunrise Movement principles, which range from affirming the organization’s policy goals to self-care, are read aloud. Training sessions are held by Sunrise all over the country, giving activists a common set of tools and resources to employ; the Columbia/Barnard hub held a training session led by Hollard at the beginning of September. Schmidt, who attended a session in Philadelphia, called it “an incredible experience.”

Sunrise empowers not only through activism but also by giving students the opportunity to lead and participate directly in crafting their path forward. 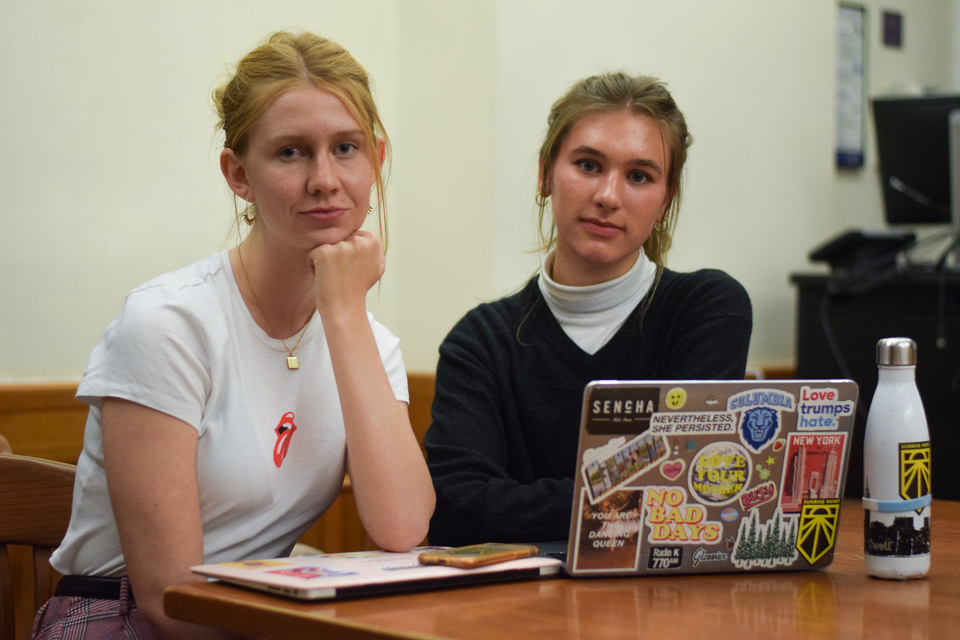 Kvittem, who trained to be a professional ballet dancer before arriving at Columbia, is gracious and friendly, and she speaks about her involvement in Sunrise and the overall movement with unassuming clarity. A sustainable development major, she’s always been aware of the environment and global warming, but she wasn’t involved in activism until Sunrise. Kvittem is from Minnesota, a state of rocky ridges, rolling plains, and deep lakes cut by glaciers, earning it the nickname “Land of Ten Thousand Lakes,” and feels a personal tie to the movement. “I could see it,” Kvittem explains, “and I could feel the consequences of climate change.”

For Love, those consequences were hiding in plain sight as a kid in Salt Lake City, Utah. “What people don't realize about Salt Lake City is how terrible the air quality is,” she says. “I remember being a kid and not being able to go outside for recess during the winter because the air was so bad. And so, they basically would quarantine you inside because people couldn't breathe. ... I just thought everybody's life was like that during the winter.” As she got older, Love began to realize that these conditions were not normal and were only getting worse. Energetic and engaging, primed to launch into detailed explanations of every aspect of the group’s work, Love finds being a hub co-coordinator deeply rewarding, but she hopes that it won’t be her career. “I hope climate change gets resolved,” she says with a laugh, “and I can move on. That would be the dream.”

Columbia’s hub has, in addition to Kvittem and Love, seven other coordinators who head up a specific part of their activities, from actions to social media to outreach. They all get together each week for an additional meeting to discuss and make decisions about the hub’s goals and progress. “We try not to be hierarchical about this at all, and so everything is very transparent,” says Kvittem. “It's never just [Love] and I making the executive decision.”

Love agrees, explaining that the entire hub is involved when possible: “Those leadership roles are pretty amorphous. We’re trying to bring in as many people as possible.” During meetings, this dynamic is apparent. The flood map was chosen after all members participated in brainstorming ideas and then voted between the three options that seemed most viable. When sketching out the map’s design, Kvittem and Love take a backseat while others debate what to illustrate and include. A first-year takes the lead on social media; despite having just joined the hub, she asked for a bigger role, eager to become more involved.

“[The] Sunrise Movement focuses so much on building a community around this issue and within hubs and within leadership,” Kvittem reports. She adds that the other coordinators are essential, especially in helping out with the logistics when she and Love get “idealistic and jump all the way to the very end.”

That’s how the Sunrise Movement works: not being afraid to go after what other people see as a dream, seeing the idealistic as possible and necessary, but at the same time grounding those ideals in concrete action. This organization isn’t just about acknowledging the enormous size of the climate problem; it’s about believing that we can fix it.

At Columbia, in Hamilton 516, the Sunrise Movement members are part of that plan and are aware of what’s to come on the national stage. But the Columbia/Barnard Sunrise hub is also working on their own community in the ways that they can right now. The meeting is scheduled to end at 9 p.m., and some members file out, hugging others as they move towards the door. But many stay, painting and laughing, looking forward to what tomorrow will bring.

Enjoy leafing through our fourth issue!