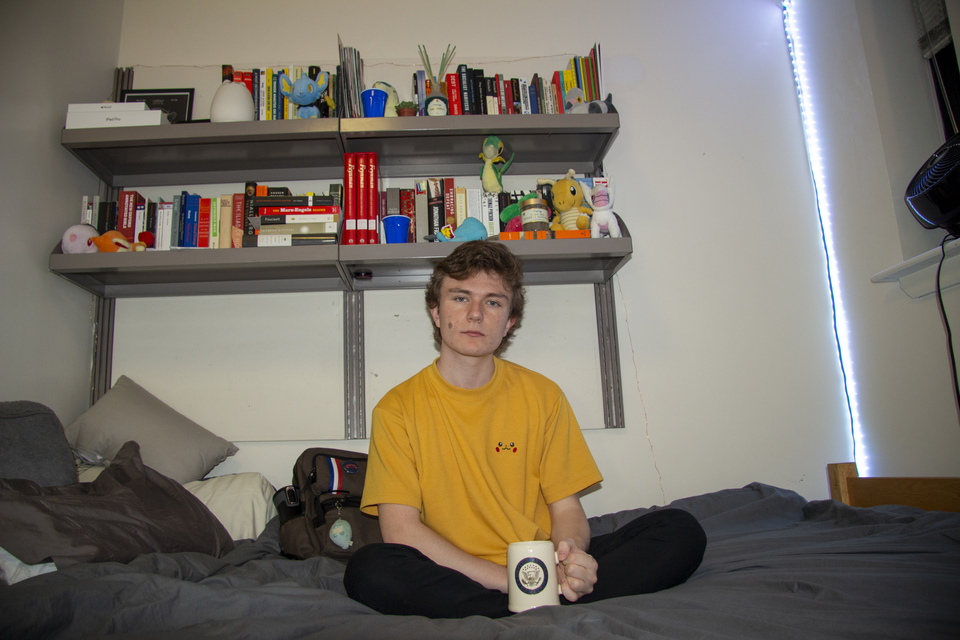 Henry Williams, a sophomore at Columbia College, is fresh out of the shower, standing in his pajamas with a towel draped over his shoulders, as he welcomes me into the basement lounge of River Hall. There is a lot to talk about, and he does not waste time. He speaks quickly and eloquently—it’s clear that he has told this story many times before. As Williams laments the uninspiring centrism that he believes has plagued leftist politics since the end of the ’60s, a student plays violin across the room. The melancholic crooning is like a funeral march for politics as we know it.

Together, they contacted the 89-year-old former Alaskan senator, who is known mainly for reading the Pentagon Papers into the Congressional Record in 1971. They were calling to convince him to run in the 2020 primary on an issues-based platform to force the radical leftist discourse onto other Democratic candidates. Their objective was not to win, but to get the candidate to reach the 65,000-donor threshold that would qualify him for the first Democratic primary debate, where he could espouse his anti-war, radical left agenda to a national audience.

They were running to lose, but that didn’t stop the campaign from going far. While Gravel has officially dropped out of the campaign, Williams and Oks don’t plan on leaving politics any time soon.

Williams believes that American politics have seen a surge of radicalization on both sides of the political spectrum, through social media and especially in the aftermath of the 2016 election. He is leading a generation of activists and politicians who are pushing the boundaries of what is deemed acceptable in political discourse.

Williams is part of a new dynamic left, and he is pushing the movement to leave the isolated sphere of leftist social media politics—a virtual playground—in hopes of transitioning into concrete grassroots action and political campaigns. In other words, he is telling us all that it’s time to leave the playground. 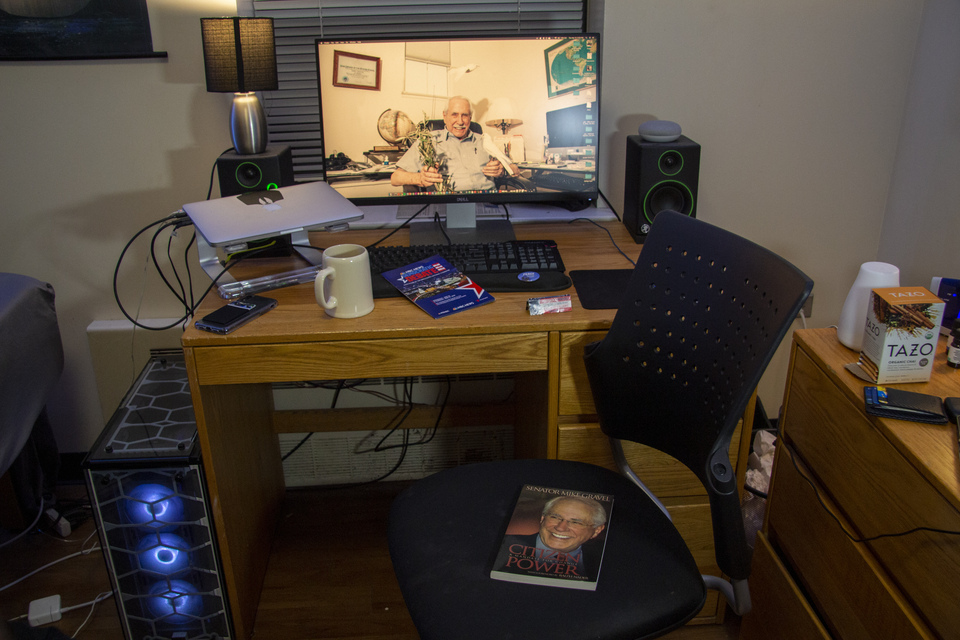 Williams understands what it means to be a political outsider. Growing up in upstate New York in a relatively liberal family, his perspective on American politics was shaped by his Australian father and his “traditional left” mother. In his first run for political office, in eighth grade, he faced stiff competition against the school’s quarterback. He stuttered in the debates and lost terribly.

In high school, politics became the focal point of his life. He obsessed over political theory and punditry with Oks, enjoying politics “in the way only unemployed students could.” But Williams, immersed in the privilege of an elite private school, felt detached from how most people experienced politics in the real world. He felt trapped in a political playground, one which operated by theory and lacked concrete action.

After 2016, he grew increasingly restless. He started to notice his “interpassivity” (he uses this word six times as we speak): “This is what I think punditry is: talking about politics, speculating and theorizing, talking who did best at the debate and how the polls are doing. But it all exists at this very circular world which looks at and consumes itself. Most people don't engage with that world; that's not how most people engage with politics at all.”

Williams grew tired of the disconnect he felt between national politics and its decision-making, and the material lives of real American people. After the 2016 election, he channeled his restlessness into running Oks’ campaign for mayor of their hometown: Ardsley, New York. Oks had noticed that there was no one running against the small city’s mayor and asked Williams to help him run. 16-year-old Williams reentered the political world as an outsider, but this time, firmly in the world of real, local, small-town politics.

The 2017 election was Ardsley’s first contested race in years. Oks eventually lost after he was taken out of the polls using electoral laws, but he still received 5 percent of the vote. Williams says the process taught him how many of the ideas he had about the world in theory were different in practice. Having to knock on doors; talk to all sorts of citizens from Ardsley, from undocumented immigrants to parents confused by Oks’ candidacy; and persist through the convolutions of electoral bureaucracy made him develop a new perspective.

Seeing how little people in his community knew about politics affected Williams profoundly. He thinks that American society has been deeply depoliticized since the ’90s. According to The Atlantic, this trend has been prominent since Ronald Reagan’s presidency. Neoliberals, while opposed to Reagan’s domestic and foreign policies, agreed with his view that voters should be shielded from the structure of corporate America; there should be separation between voters and the economic infrastructure behind politics. Williams disagrees. For him, everything is political.

“We imagine that there is this one world of politics, with issues there—maybe abortion, maybe welfare, maybe a couple subjects—but outside of that is not politics,” he tells me. “But all politics is how power operates and every time you are being oppressed by your boss, your wages are getting stolen, or you are working overtime without compensation, [or] your immigrant status is being used to bully you or to pay you less—that's all politics!”

Williams believes this depoliticization has been caused by a failure of the left since the end of the 20th century to engage the people with a cause. Namely, that failure is that leftist politicians adhere to the idea that everyone is interested in the same goal, but people have different methods to achieve them. This put distance between the national political conversation and most people, alienating them from what is being discussed. William says, “We can be ideological, but only when it comes to the media we consume and what we talk about and the identities that we have.” National politics have become a selective and meaningless playground, one in which most people are denied entrance.

As we speak, it becomes clear that Williams is very cynical of people who cannot escape seeing politics as an aesthetic game, detached from grassroots work and planning. He saw a similar situation in his experience with Model United Nations in high school, making him dubious of how the future members of the political class are being formed. To Williams, MUN was “this way of pretending like you are filling bigger shoes than you are. In other words, it’s a place where people are just faking it.”

Williams has also distanced himself from campus politics here at Columbia, which he thinks is just a transposition of the same playground in a new context. Economics classes also play into the maintenance of unjust systems of power. According to the sophomore, they are effective champions for the “status quo,” celebrating how good the current systems are and contributing to an “industry of optimism.” Columbia specifically has a lot of people who are cynical about the institution and seem to care about social justice, but Williams asks, “are they cynical about themselves?”

After running Gravel’s radical bid to become the democratic candidate, Williams has become one of this generation’s most recognizable political members. The Gravel campaign was notorious for its use of social media, with plenty of savvy tweets, defamatory memes, and provocative merchandise.

woah Liz Warren just sent us this image? what could it mean.. pic.twitter.com/saDS0dzJRH

The duo was inspired by the effective and smart media strategies behind the rise of South Bend Indiana Mayor Pete Buttigieg and entrepreneur Andrew Yang—two complete outsiders who have managed to get a lot of attention. “How fucking hard is it?” Williams asks. They noticed that these outsiders with limited funding were entering the race and getting high numbers of interactions in social media, together with media coverage.

Oks and Williams understood that they themselves could only go “so far,” and decided to contact the former Alaskan senator, who graduated from Columbia’s School of General Studies in 1956. A notorious leftist politician who had been pushing for anti-war legislation and social justice since the ’60s, Gravel had fallen into obscurity since an unsuccessful campaign for the Democratic (and later Libertarian) nomination in 2008. Williams and Oks saw him as the perfect candidate to appeal to a specific audience: educated young leftists. The intention behind the campaign was to give those people a way out of their own playgrounds of obscure leftist internet politics and bring their ideas to reality. This meant the campaign had to be issues-based, using phrases such as “American empire” and pushing an anti-war message—something Gravel has always believed in—to shift the conversation in the Democratic party. They wanted to show that the party could go even more left than Vermont Senator Bernie Sanders.

The campaign has found surprising success in the mainstream sphere of politics, as well as the radical. The Gravel Teens, as the Oks-Williams duo became known, attracted a lot of attention from political podcasts to the New York Times. Williams believes that the campaign was successful in proving that complete outsiders could make it into the Democratic conversations as long as they had something worth saying. The campaign was born out of nothing, “with no money and no connections.” Since the teens had nothing to lose and did not care about winning, the campaign was able to address things politicians would not dare to touch, like the legalization of sex work, an act Gravel believes would provide federal regulation that could cut back on human trafficking.

While Gravel technically qualified for the debates, he did not meet the polling criteria favored by the Democratic tie-breaking rules, effectively ending his campaign last summer. Nonetheless, Williams got what he wanted: a shift in the conversation. 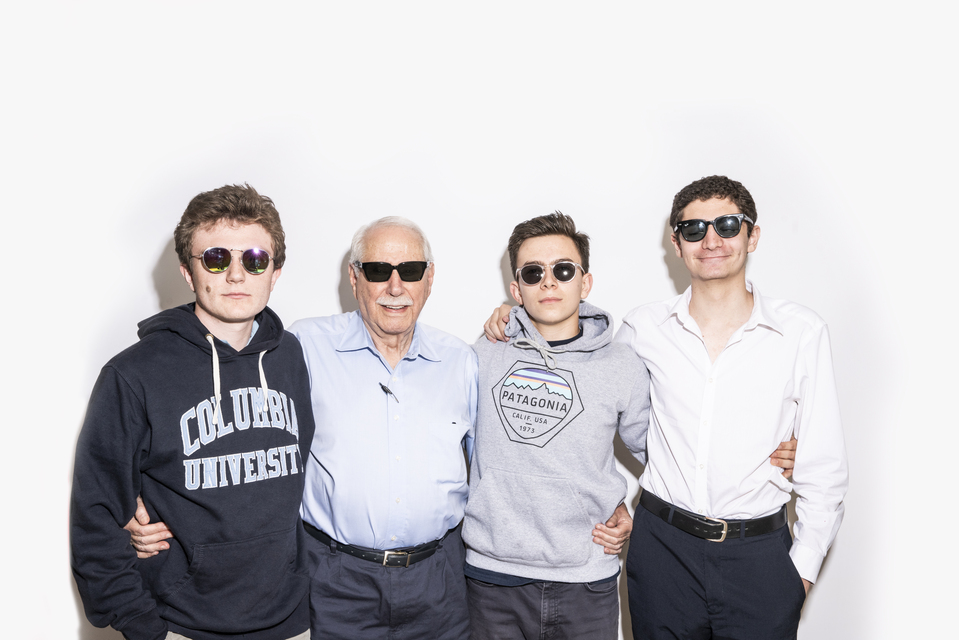 With the campaign being over, Williams is still here at Columbia, in a world of ideas, but he’s kept one foot in the outside world, out of the playground. His goal remains to reintroduce an ideology of anti-centrism and challenge the depoliticization that has separated most people from the political sphere. He wants to bridge generations of the American left, because “it's either very young or very old,” claiming the torch handed over from the leftists of the anti-war movements in the ’60s and ’70s. In his eyes, the new left is radicalizing, now better organized and more issue-driven than ever before.

“There are fundamental changes in the world order that we wanna see. This is not a five-year, election cycle project, this is a 100-year project,” says Williams. Together, the Gravel Teens are bringing other activists, including Isra Hirsi, Ilhan Omar's daughter, and leftist figures together to form the Gravel Institute. Williams is its executive director. There are three main goals: formulating policy ideas that can be implemented, learning the most efficient way to communicate those ideas and policies to the people, and, as Williams put it, “translating whatever online sentiment or popularity you have into power.”

“The left needs institutions if it's ever gonna actually fight back, and so for us, we have transitioned to that world of institutional building—that's what the institute is about.” Williams knows he may not see things change much in his lifetime, just as Gravel knew half a century ago when he was advocating for his own radical change, but he is in it for the long run, “[so] that the left can win not only this election, but every election.”

Enjoy leafing through our seventh issue!