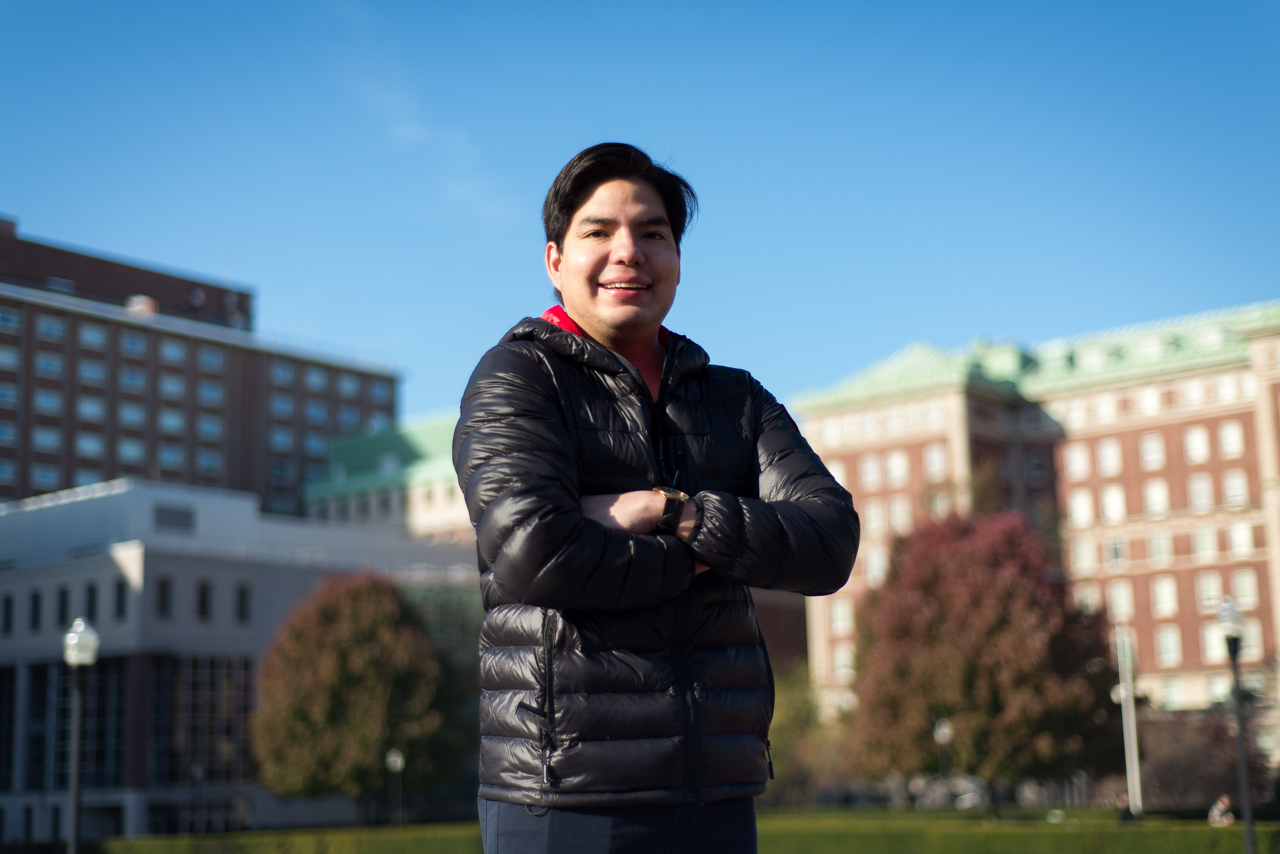 Before speaking to Luis Velasquez, I never knew it was possible to be in Peru, China, Harlem, and on Wall Street all at once.

Seated in the sturdy, squeaky chair of NoCo’s Joe’s café, listening to Velasquez’s stories, I am transported into a world of global affairs, activism, and awareness. Velasquez, a senior in General Studies studying political science, was awarded a medal of honor by the Peruvian government in June 2017 and renewed in July 2019, becoming the youngest person in 197 years to receive such an honor. With a glittering gaze and energetic poise, Velasquez recounts his experiences traveling the world, representing the politically engaged youth of South America and raising awareness on the Venezuelan migration crisis.

Velasquez begins his story at his family’s restaurant in Peru. His descriptions place me on the streets of Lima with him, in search of a place to eat that welcomes people from all corners: politicians, neighbors, friends. Finally, we stop at El Rosedal, the restaurant his parents own. Through this narrative, I stand side-by-side with a young Velasquez, helping his family take orders and sneaking the occasional bite of cuy from the chefs. The atmosphere here is vibrant: friendly banter is exchanged between neighbors, the various smells of spices fill the air, the streaks of sunlight slip in through the curtain blinds, illuminating the spirit contained within these restaurant walls.

Despite his love for the family business, Velasquez tells me he had a dream that extended beyond the restaurant: “I wanted to do something more, something that fulfilled me.”

“What was that something more, then?” I ask him.

Without hesitation, he replies, “Politics.”

Velasquez tells me that his work in global affairs started through MUN. Through topics that range from the regulation of fissile materials in nuclear research to the consequences of sanctions that result from peace treaties, MUN delegates learn about international diplomacy, global affairs, and compromising. It was through MUN that Velasquez found his passion for uplifting the voices of the unheard, specifically the voices of those affected by the Venezuelan migration crisis.

The Venezuelan migration crisis began in June of 2010 under the tenure of then-president Hugo Chávez and has extended into the presidency of Nicolás Maduro. It is characterized by extreme political and economic instability that has pushed many Venezuelans to neighboring South American countries, the Caribbean, and the United States. The Venezuelan migration crisis is the biggest refugee crisis in the Americas to date; however, it is an issue that Velasquez believes has only been given minimal attention. His efforts aimed to change that narrative, beginning with a trip to Beijing.

For many, being 19 is a tremendous feat: It is the age that marks the beginning of the end of one’s teenage years and the start of one’s journey into adulthood. For Velasquez, 19 was the age he applied and was accepted to attend the 2014 Asia-Pacific Economic Cooperation Summit as a representative from Peru—the moment that “started everything.”

Describing the International Conference Center where the summit was held, Velasquez takes me on a journey past recognizable global figures: when he saw President Obama, President Putin, President Jinping, President Nieto, and others. The atmosphere he summons is different than that of El Rosedal’s—different, yet exciting.

After Velasquez greets many of these prominent figures and discusses topics ranging from global economies to international refugee crises, the culmination of this narrative arrives: Velasquez’s speech about youth empowerment. Listening attentively, I recognize the passion in Velasquez’s voice as he discusses the importance of youth involvement in politics, and I can hear the sheer confidence with which he speaks, despite being the youngest in a room filled with the arbiters of global peace.

Velasquez was invited to speak at the APEC Summit again in 2016. He has also attended several conferences around the world to train other students in speech and debate, an achievement for which the Peruvian government awarded him a medal of honor in 2017 and again in 2019.

Receiving the medal in a room full of members of the Peruvian congress was an experience he’ll never forget. “It was an amazing moment to be in that room, in front of them, and just being reminded of my hard work,”Velasquez said.

Velasquez brought his passion for youth empowerment to Columbia, his home for the past four years. Prior to his senior year, Velasquez was a member of the MUN traveling team, serving as the Under-Secretary General of Administration for the XVII edition of the Columbia Model United Nations Conference and Exposition. Here, Velasquez supervised high schoolers debating and discussing a myriad of past and current historical issues.

Extending his MUN career to engage younger scholars, Velasquez describes how MUN has impacted the students he’s worked with: “Model United Nations is such a fundamental molding process for many, and being in that room as students’ faces are lit up is such an empowering feeling. It’s like I’m in the room to plant the seed, but the students’ passionate involvement is what makes the seed grow.”

Today, Velasquez is still involved in global affairs and continues to raise awareness on the Venezuelan migration crisis. But he has also taken on a role in the finance sector, working as a consultant for an investment bank on Wall Street (he has since quit). His involvement in international relations and consulting may have seemed like a contrast to his previous activities, but to him, they were both tools for change. According to him, economic knowledge is a catalyst of empowerment and good government, especially in Latin America.

Listening to Velasquez narrate his experiences as a businessman, a student, a representative, and a consultant, I see the web of connections formed across the various disciplines.

Ears perked and brows raised, I ask, “How do you do it all?”

“Sometimes ideas and solutions are way easier to achieve than you think,” he tells me. “Making them a reality is the hard thing, but the little things matter too, like getting petitions and having tough conversations with those around you.”

For Velasquez, enacting change is a civic duty. As a proponent of change, he views change not as a static process, but as a continuous sacrifice, renouncing comfort for new experiences that foster personal and communal growth. As I reminisce on the journey Velasquez has taken me on, his advice to young activists resonates with me:

“Look within your community to see what’s missing, or what’s not going right. Don’t be afraid. It’s going to be a bumpy road, but the impact you will make is worth it.”

Enjoy leafing through our seventh issue!